What are cell organelles

The topic of cell organelles is a classic “memorization” topic. If you're already in high school, this article will help you review it.

You should be able to reproduce the following individual terms and their meanings by heart. If this is not the case yet, you can perfectly feed your knowledge of cell organelles with our short explanations.

The cell nucleus is probably the best-known cell organelle. It contains the genetic material that controls metabolic processes and cell division. Delimited by the nuclear envelope, which consists of an inner and an outer membrane, an exchange of substances with the cytoplasm takes place only through the nuclear pores. Inside the cell nucleus there are thread-like structures, the chromatin. If this condenses, separate chromosomes become visible. The nucleolus (the cell body), which is involved in the formation of ribosomes, is also located here.

Ribosomes are either free in the cell or bound to the rough endoplasmic reticulum. In the course of protein biosynthesis, they are involved in the synthesis of proteins in the cell nucleus on the basis of the building instructions.

The endoplasmic reticulum belongs to the inner membrane system of a cell and runs through the entire cytoplasm. It is in close contact with the nuclear envelope. With the endoplasmic reticulum (ER) a distinction is made between the rough ER and the smooth ER. Many ribosomes, which produce proteins, are attached to the rough ER. These are further changed by the ER and folded into a specific spatial structure. On the other hand, there are no ribosomes on the smooth ER; instead, this structure is responsible for the breakdown of toxins and drugs or is involved in the formation of lipids or hormones.

Mitochondria are cell organelles in which energy is produced in the course of cell respiration (Chapter 4.1.2). Therefore, they are also known as the power plants of the cell. Mitochondria have two membranes and both their own DNA and ribosomes. The number of mitochondria in a cell depends on what function this cell is supposed to fulfill.

Chloroplasts are found in all green parts of plants. Like mitochondria, they are surrounded by two membranes and have their own DNA. Chloroplasts have many flat membrane sacs (thylakoids) inside, which are arranged in stacks (grana). This is where the chlorophyll is stored, with which the light is converted in the course of photosynthesis.

Vacuoles often take up most of the cell in plant cells. They are filled with cell sap and serve, on the one hand, to store substances and, on the other hand, to give stability to plant parts that are not lignified.

Structure of a plant cell

Structure of an animal cell 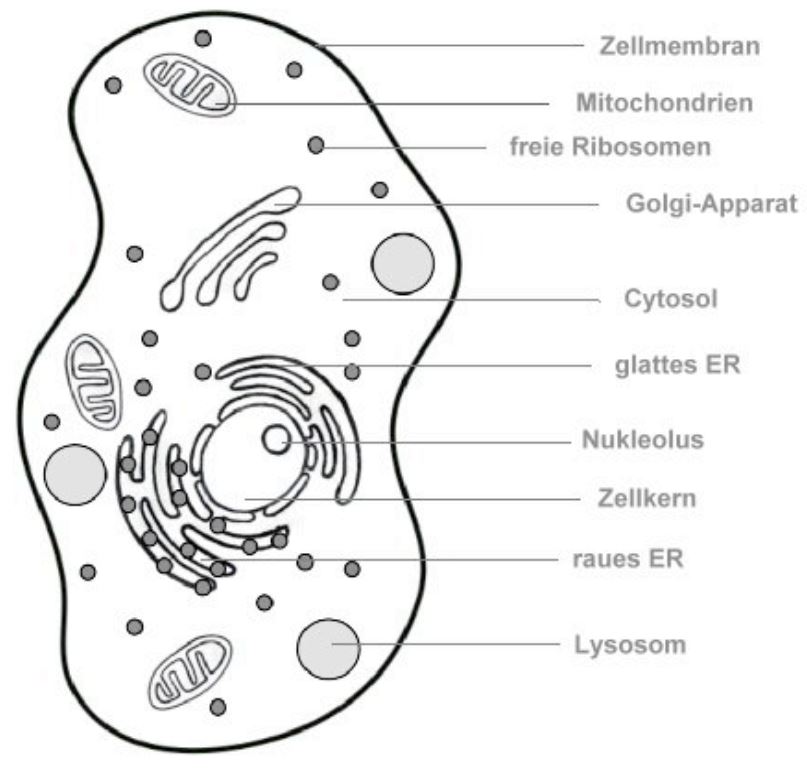