What colors is a Rubiks Cube

As in many games, some parts of the game have special names, for example in chess, there is also a "king", a "horse", and even individual moves have names. It is the same with a 3x3x3 Rubik's Cube. This chapter explains what the individual components of a cube are called. The next chapter describes the notation, i.e. what individual rotary movements are called.

"Cubies" or "Cubeletts", or simply stones, are the small cubes that are located on the surface of the Rubik's Cube. With a 3x3x3 Rubik's Cube there are 3 different types of Cubies. (The respective "Cubie-Art" is colored gray)

Furthermore, there is exactly once every Cubie. For example, there is only exactly 1 corner stone that is white-red green and only one edge that is blue-orange.

With a Rubik's Cube you can always have an entire page, in technical terminology it is also "layer“Called, turning, that is what characterizes them.

A 3x3x3 Rubik's Cube has a total of 9 different layers (the respective layer is colored gray):

The names of the rotary movements are derived from the English names of the individual pages. More on this in the next chapter notation.

The color scheme of a Rubik's Cube indicates where which side is in the dissolved state. Any color scheme is allowed at official competitions (of course only as long as there is only one color), so you can stick on your cube as you like, but this book is based on the western color scheme.
The two most frequently used color schemes are the western and the Japanese, sometimes these are also mirrored, which means that all the opposite colors are still correct, but in a different order.

Colors lying next to each other

Test if you understand [edit]

Here you can check whether you have understood this long paragraph under the heading Center stones.

Question: Can you determine what kind of cubie (type, color, alignment) is in the released state at the circled point? If so, which stone is it? Why? 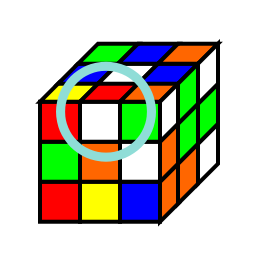 The stone you are looking for is a white-orange curb stone, with the white sticker surface facing upwards and the orange-colored one facing forward.
This is because afterwards in the dissolved state the white surface must point upwards and the orange one towards the front (if you do not turn the cube around its own axis afterwards). This is determined by the color of the center stones.

"Importance" of a step [edit]

Most of the step-by-step solutions will include a line with Importance: mandatory / recommended / optional Find. It indicates whether you should learn this solution if you want to solve the cube by heart.

this is what this subchapter deals with

this is what this sub-chapter deals with