What is the real meaning of bending stresses

This mechanics script shows how the load on bending can be calculated. More precisely, this is about the calculation of the bending stress of a beam that is loaded with a transverse force (differentiate between pure and transverse force-free bending). To understand the bending load on a beam, here are some key basics:

If long, thin components such as shafts, rods or beams are loaded with a bending moment across the component axis, both tensile and compressive stresses arise, which ultimately result in deflection. If you want to calculate this bend, the following understanding is important:

In the area of ​​the tensile forces, the affected component is stretched, whereas it is compressed in the area in which the compressive forces act. The layer in the middle between these two areas is the so-called neutral fiber. Neither elongation nor compression takes place along this line. According to the definition, the tension emanating from the neutral fiber increases steadily in the direction of the outer component edge. As a result, the strongest stresses occur on the outer edge of the component. 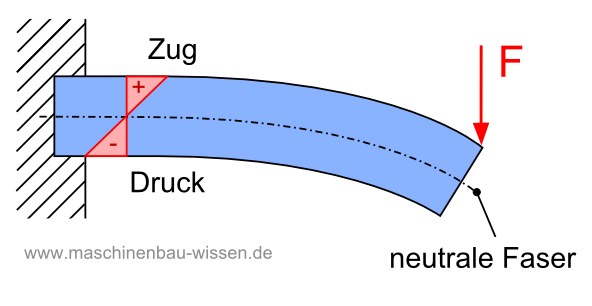 Figure: Bending load on a beam with tensile and compressive stresses

You can find more about beam bending in the main section:
Beam bending script

Example 1 - bending stress on a component

The rod, shaft or beam is subjected to bending as a result of the force F, whereby the originally straight rod axis bends. As can be seen, both tensile and compressive stresses arise within the cross-section. In order to clearly illustrate this fact, the extent of the deflection has been shown greatly exaggerated in the sketch.

Here is a hint that this example is a so-called straight bend and a shear force bend. Read more about the different types of bend in this script:

Figure: Bending load on a beam with tensile and compressive stresses

The neutral fiber (dash-dot representation) is completely stress-free, while the strongest stresses can be seen at the edges of the rod. The following applies to symmetrical cross-sections: The tensile and compressive stresses are always distributed linearly, i. H. evenly over the entire cross-section of the component.

The following formula is used to calculate the bending stress:

How to calculate these two quantities, read in the following.

The bending moment Mb to calculate

In the following, only formulas for simple load cases are given. In order to avoid confusing and complicated calculations, the bending moment is determined for all other cases using formulas and tables that can be found in books of tables.

In practice, the following load cases can be found for bending moments Mb with a single force acting particularly often:

For the beam clamped on one side, as shown in example 1, the following applies:

M.b - Bending moment
F - force (lateral force)
x - distance (of the force F from the fixed bearing of the beam) 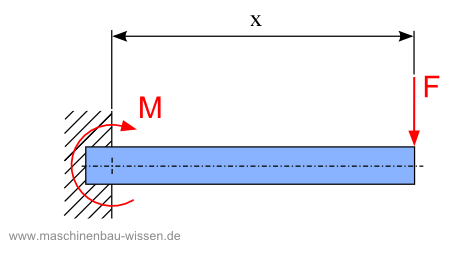 Bending moment on a beam clamped on one side

Here are some links where you can read more about the basics of calculating bending moment:

The axial section modulus is a measure of the resistance to deflection. That is why it is often referred to as the bending resistance moment. Only the geometry of the component cross-sectional area under consideration is decisive for the size of the section modulus.

The definition of the exact position of the neutral fiber within the cross-section is a basic requirement for calculating the section modulus. The neutral fiber runs exactly through the center of gravity of the cross-section. Starting from this line, the greatest possible distance to the outer edge (edge ​​fiber) can then be determined, where the highest component loads or the greatest stresses are to be expected.

The moment of resistance is calculated as the quotient of the area moment of inertia and the distance (aMax), which represents the dimension from the tension-free neutral fiber to the outer edge (edge ​​fiber).

You can find more information about the section modulus in the following articles:

The area moment of inertia

In the picture below you can see two examples for the calculation of the geometrical moment of inertia and the bending resistance moment. 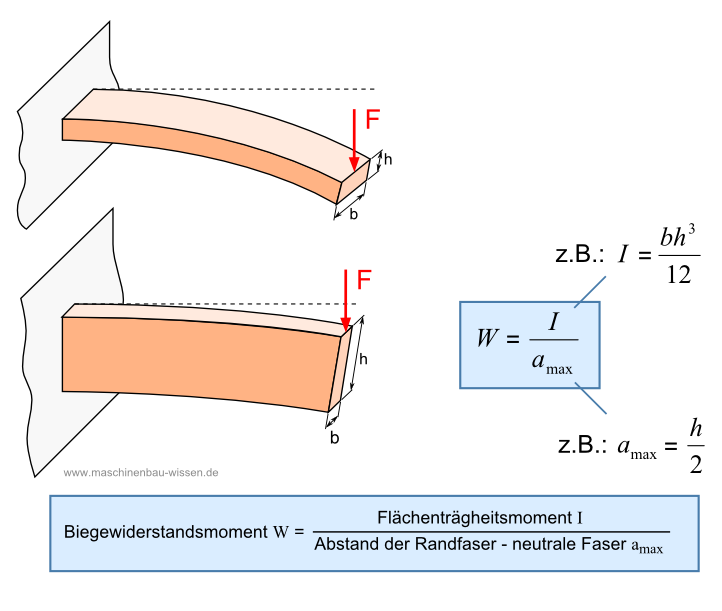 With the calculated values ​​- bending moment, area moment of inertia and resistance moment - you can now go to the formula shown at the beginning and calculate the bending stress.

More scripts with the basics of the area moment of inertia can be found here:

The second example shows the second typical case for a bending load. Here you can calculate the bend in a relatively similar way. 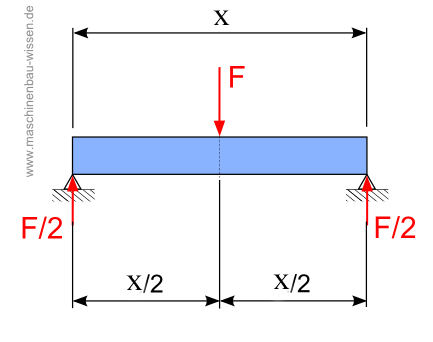 M.b - Bending moment
F - force (lateral force)
x - distance (of the force F from the fixed bearing of the beam)

Annotation:
The bending stresses and bending moments calculated here are the maximum values ​​that occur in each case. 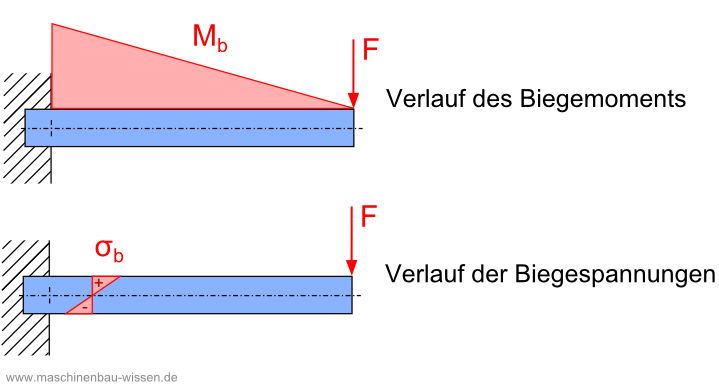