Who was William the Conqueror? 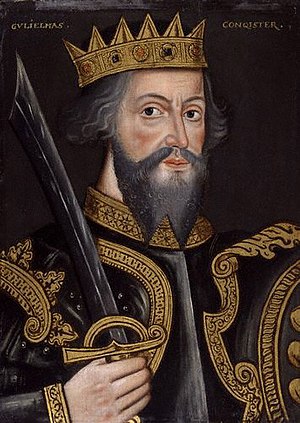 William the Conqueror in a 17th century painting.

William the Conqueror lived in the Middle Ages and was a Duke from Normandy. Today it is an area in the north of France. From 1066 to 1087 he was King of England. Previously, he had defeated Harald the Second, the last king of the Anglo-Saxons, in the Battle of Hastings and thus snatched the throne. That is why he was called "the conqueror". Actually, his king's name was Wilhelm the first. The Bayeux Tapestry tells of Wilhelm's conquest.

Wilhelm's conquest ended Anglo-Saxon rule over England. The culture of the Anglo-Saxons then mixed with that of the Normans. That is why there are many words in English today that come from French.

The new king wanted to know exactly what he ruled over. That is why he had the “Doomsday Book” written. All land and other valuable goods in England were listed there. The population figures were also included. The “Doomsday Book” is still used by many historians as a source to learn more about the time.

William died in 1087 in a monastery near Rouen in Normandy. His descendants continued to rule as kings of England. This also included his great-great-grandson Richard the Lionheart.

What did Wilhelm experience as a young duke?

Wilhelm was born in either 1027 or 1028 in the city of Falaise. His family, the Rollonids, descended from Vikings and had ruled Normandy as dukes since 911. His father Robert the First had never married Wilhelm's mother Herleva. That is why he was called "Wilhelm the Bastard" until 1066. This is a dirty word for a child whose parents are not married.

Wilhelm became Duke of Normandy as a child. Adults like the Bishop of Rouen helped him rule. However, the nobles in Normandy did not want a child as a duke. That led to riots. Several protectors and advisers of Wilhelm were murdered. The main reason why Wilhelm was not killed himself was because the King of France ensured his safety.

But even when Wilhelm grew up, he had to defend his rule in wars. Ultimately, the nobility recognized their rule. Normandy became a rich and powerful duchy under him. He had magnificent buildings built like the two monasteries of Caen.

How did Wilhelm conquer England?

This is part of the long Bayeux tapestry. It shows a scene from the conquest of England. 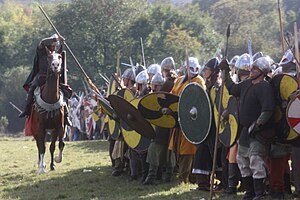 Here actors have reenacted the Battle of Hastings.

Through his grandfather, Wilhelm was related to the English King Edward the Confessor. During a visit to England, Eduard, who had no children, is said to have chosen Wilhelm as his successor. Eduard died in 1066. The Witan, a council of nobles and clergymen, chose Harald Godwinson, a rich count and Edward's brother-in-law, as the new King of England. Harald claimed that Eduard had promised him that on his deathbed.

Wilhelm was furious because he wanted to become King of England himself. Harald the Harte, King of Norway, had also hoped for the English throne because he was the descendant of a previous English king. In September 1066 Harald the Harte and his soldiers invaded northern England in order to come to the throne by force. Harald Godwinson's troops were able to defeat the Norwegians and kill Harald the Harsh. But the fight weakened her very much.

In the meantime Wilhelm had put together a fleet of 600 ships and 7,000 soldiers. On September 28th he went ashore with his troops near Pevensey in southern England. The Normans began to pillage the surrounding villages.

On October 14th, near Hastings, they met Harald's exhausted soldiers, who had just returned from the battle against the Norwegians. The decisive battle of Hastings came about. At first the Normans had a hard time against the Anglo-Saxons. But finally Harald died in the battle.

Wilhelm's soldiers marched on to London, where the nobles and clergy submitted to him. At Christmas he was crowned at Westminster Abbey. Royal coronations and weddings are held in this church to this day.

There are also other search results for “William the Conqueror” from Blind Cow and Ask Finn.

The Klexikon is like a Wikipedia for children and schoolchildren. The most important things explained simply, with definition, many pictures and maps in over 3000 articles. Basic knowledge suitable for children, everything easy to understand and good for presentations in school.
<?