How old is the Ford Model T.

Years of construction: 1908 - December 1927; Number of units over 16.5 million worldwide, of which 15,456,868 from North American production, around 300,000 from Manchester (GB), 10,341 from Irirscher and 3,771 from Berlin assembly
Engine: 2,890 cc four-cylinder in-line engine with 20 hp, magneto ignition and flywheel alternator
Power transmission: two-speed planetary gear, rear-wheel drive, the brakes only act on the rear axle via the cardan shaft
Chassis: Ladder frame with rigid axles at the front and rear on transverse leaf springs with good off-road mobility
Driving performance: Top speed around 75 km / h (depending on the structure) 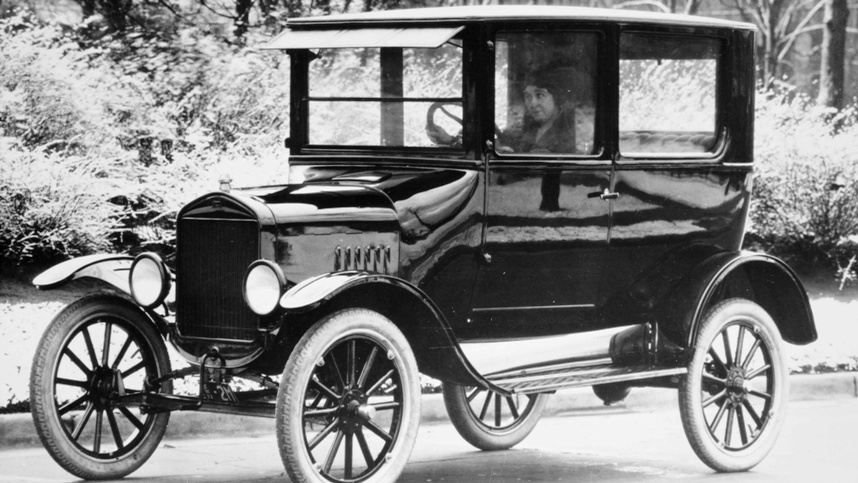 It is hardly an exaggeration to say that the Model T changed the world. Before that, automobiles were almost exclusively toys for the wealthy. Although the earlier Ford models were already relatively inexpensive, their purchase price still stood in the way of wider distribution.

When Ford sold the first T-models in October 1908, their price was $ 850, which is equivalent to around 18,000 euros today. At the time it was a real special offer. What was even more astonishing was that Ford was able to keep lowering the price over the next 19 years. In 1922 it fell below $ 300! In a few years, however, it increased slightly due to improved equipment. Under the "14 points why you should buy a Ford", praised Ford the virtue: "Never runs away. Horses often do. "

In 1913, Ford began manufacturing assembly lines at the Highland Park facility. The time it took to assemble a T-model dropped from 12.5 hours to one and a half hours, then every ten seconds a T-model left the assembly line. Ford revolutionized industrial production by breaking down the assembly of cars into the smallest individual steps, which were carried out in monotonous repetition by semi-skilled workers along an assembly line. When the assembly line was in full operation in Detroit in 1915, industrialization meant mass production, and mass production became synonymous with modernity. If the manufacturing costs were previously high in traditional handicraft production and remained so even with increasing numbers, this has now changed radically, as the manufacturing time and, as a result, the costs were reduced many times over. By doubling the daily wages of his workers to 5 dollars at the same time, thereby strengthening their purchasing power, the T-model became the first car in the world at a price of around 345 dollars in 1916, even for the “little man” who screwed it together, what soon found expression in the advertising slogan: “One day - one dollar, one year - one Ford”.

Although nothing about the car was fundamentally new, the Model T became the most successful automobile of the time. The mass production and the low price alone do not explain the overwhelming success of the Model-T. The good press and word of mouth convinced many buyers, who were also convinced of the quality. Before that, most automobiles were quite unreliable, the T-Model was the opposite - which also led to the nickname 'Tin Lizzie' (sheet metal tile). In American, 'Lizzie' means a reliable maid.

Ford built four-cylinder engines even before the Model-T, but this was the first time that an engine block made of one piece was used. The engine, transmission and ignition were all encapsulated and thus largely protected from the dirt on the road. All components were lubricated by a central oil pump. The stable vanadium steel alloy was also used before, but used here for the first time in better quality and in larger quantities.

The planetary gearbox developed by the Dodge brothers was further improved by Ford and made operation quite easy for the conditions at the time. The early T-models got by with two pedals, later there were three to be able to keep both hands on the steering wheel when shifting gears. For the first time in the T-Model, the cars were left-hand drive, today of course in countries with right-hand traffic.

'You can have it in any color, provided it is black.'This saying is probably one of Henry Ford's best-known. However, the Model T was definitely available in other colors. Between 1908 and 1924 the T-Model was offered in many colors, including a bright red. With the introduction of assembly line production in 1914, the choice of colors was limited. Only a black varnish met all the requirements, and historians have now been able to refute that it dries faster. In 1925 the color palette was expanded again to stimulate sales.
The color was not the only option for the T-Modell. The simple construction without frills only came with a chassis, but you could choose from a myriad of bodies: the most popular were the touring cars and sedans, and Ford offered ex works Coupé, Town Car, Roadster, Deluxe Tourer, Runabout, Deluxe Runabout and a delivery van - the forerunner of the later model TT truck. The reliability and robust construction made the T-model ideal for many purposes. It was converted into a bus and used as a truck in agriculture and forestry. Some companies offered conversion kits that could be used to convert it into anything from a snowmobile to a mobile home.

The global expansion of the Ford Motor Company began with the T-Model. In 1921, the T-Model made up 67 percent of global automobile production. Of course, overseas production also contributed to this. The Trafford Park plant in Manchester (GB) opened in 1911 and Bordeaux (F) in 1923. This was followed by Cork (IRL), Paris (F), Copenhagen (DK), Antwerp (B), Yokohama (J), Cadiz (E) and many others.

From 1925 the Model T was assembled in Germany. 6,949 units are put together from the parts shipped in wooden boxes. The parts required for this were delivered via Copenhagen and Antwerp and assembled in a rented hall in Berlin's West Harbor. The reason for this was the immense import duties that were then levied on complete vehicles. The T-model promptly wins the 1st price of the ADAC utility and economy drive in 1926. The new car prices for the T-model in the German Reich were then given as follows: 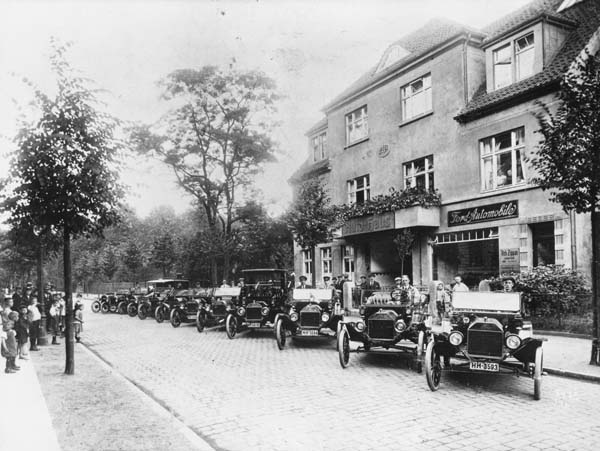 Model T installation in front of a Ford dealership, presumably in Hamburg

In the almost twenty years of construction, the Model-T hardly changed. In the first few years, wood from our own forests was still used in the construction of the bodies, later on they switched to all-steel superstructures. The first T-models also had to be started by hand with the crank; a starter was only offered for an extra charge from 1919 onwards. Other visible changes included the radiator, the material of which was simplified from polished brass to painted steel, a larger steering wheel and different wheels.

The last T-model left the line in Ireland on New Year's Eve 1927; production in the USA ended at the end of May. For the 50th anniversary of the T-Modell, a "Tin Lizzie" from model year 1909 was built from new parts on October 23, 1958 at the Ford plant in Mahwah. For the company's 100th anniversary in 2003, six T-100s made from new parts were launched, originally a small series of one hundred pieces was planned.