What is router support

With the growing popularity of multi-service applications, real-time constant bit rate (ATM) and VBR-rt (variable bit rate real time) connections are becoming a more common choice for transport for network managers. This document explains some key concepts that are important to understand how a router can support these real-time service categories.

There are no special requirements for this document.

This document is not limited to specific software and hardware versions.

The ATM Forum Traffic Management Specification 4.1 (TM 4.1) defines CBR and VBR-rt as "intended for voice and video applications that require highly limited delay and delay fluctuations". While compressed voice and video streams are the ideal application for VBR-rt, the primary purpose of CBR is to transport circuit emulation services.

The first important concept is that TM 4.1 and other ATM standards only deal with service aspects related to the ATM network. According to TM 4.1:

In the terminology of the ATM forum, a router is an end system, i. H. the device from which cells are obtained and terminated (SAR process) instead of being changed by ATM nodes and networks. It is important that a router - regardless of the service category used - is only obliged to comply with the negotiated data traffic contract and its parameters for the ATM network.

Note: The UBR + was categorized along with UBR because the Cisco router implementation never changes the actual shaping rate to MCR. Therefore this parameter only has an informative function.

Another traffic parameter that relates to the above parameters is the Cell Delay Variation Tolerance (CDVT). This parameter measures the level of tolerance that a network interface has for aggressive transmission (back-to-back or cells with very close spacing) by a connected device and does not apply to end systems. TM 4.1 also defines an additional set of QoS parameters. The most important are:

TM 4.1 specifies that these performance parameters apply exclusively to the ATM network and not to the router:

Every router ATM interface developed for WAN applications supports at least the first two "classes" in the table above. The router fulfills the ATM traffic contract perfectly as long as it transfers cells at the speed set by the SAR (segmentation and reassembly) scheduler. In this case, the ATM network alone is responsible for ensuring that cells sent on a real-time VC receive a faster delivery time.

If the router does not have an explicit configuration syntax for CBR, the user can configure either a UBR (Unspecified Bit Rate) connection with the desired PCR or a VBR connection with PCR = SCR (the MBS has no influence) to comply with the data traffic contract. It is also sufficient to configure a VBR-rt connection on the router as "normal" or VBR-nrt.

If a single VC is configured for an ATM interface, or if multiple VCs that are completely homogeneous in terms of traffic type (e.g. VCs connecting core routers with a Layer 3 QoS configuration), it is not really It is important which option is selected in the configuration described above. The selection of the exact service category can only be important if different types of traffic are transmitted on different VCs. Prioritization at the VC level is required, as explained in the next section.

If an ATM interface is configured with multiple VCs and two or more of them are actively transmitting at the same time, there is a chance that the SAR scheduler will attempt to transmit two cells at the same time (i.e. in the same cell slot) based on the ideal cell rate for the both VCs. This event is known as a "collision" and its probability is proportional to the number of concurrently transmitted VCs and their speed in relation to the physical line speed.

In the event of a cell collision, an implementation-specific prioritization scheme must decide which VC a cell is transmitted at a point in time that reaches the ideal rate and which cell is "pushed" into the next cell slot, where another collision may possibly occur. Under extreme conditions (i.e. when the connection is overcrowded), a robust SAR implementation never discards cells on the transmit interface. Instead, the "starving" VC transfers cells very slowly or not at all. This is illustrated in the following figure: 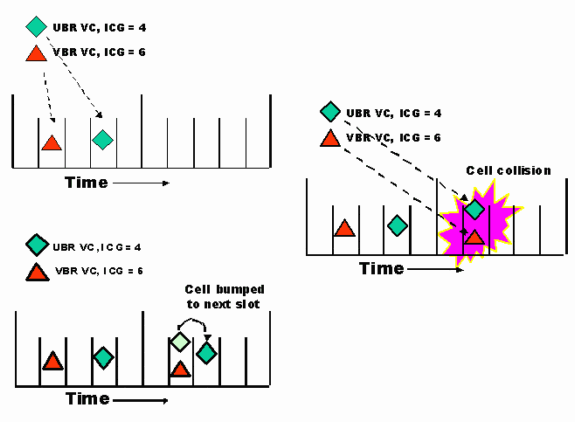 There is no standard for how an end system should behave in such cases and everything is up to the implementation. It is intuitive to serve real-time class VCs first so that their jitter and the likelihood of them exceeding the CDTV at the entrance to the ATM network are minimized. However, if the competitor VCs are in the same service category, another tiebreaker level must be used. This can be a priority assigned to the VCs as described in the next section.

The Enhanced ATM Port Adapter (PA-A3) is the most versatile and widely used high-end router interface for ATM networks. The solution was originally developed for the Cisco 7500 and 7200 series routers and is also supported by the Cisco 7600 Optical Services Router (OSR) FlexWan. It is one of the Cisco router's ATM interfaces that provides an explicit CLI for configuring CBR and VBR-rt connections.

Prior to the release of Cisco IOS® software version 12.2 (5) and derivatives, such explicit commands were not supported by the software driver and firmware for the PA-A3, and the firmware scheduler implemented a customizable four-level VC prioritization mechanism. The changes made with Cisco Bug ID CSCdv04389 (registered customers only) for the 7200 and CSCdv84038 (registered customers) for the 7500 series have enabled CLI support for CBR and VBBR R-rt, also increasing it to six of priorities as a tiebreaker in the event of cell collisions. By default (the customization is always with the priorityCommand possible) the following priorities are now:

However, these changes did not affect the existing scheduler functionality, so that, as already mentioned, CBR and VBR-rt connections can also be used with older software versions.

It should be noted that the design and sophistication of the PA-A3 port adapter enables the platforms using this adapter to achieve unmatched levels of stability, functionality, and performance in all applications. For example, the following snapshot, taken with an ATM Traffic Analyzer, shows the excellent shaping accuracy. During the test shown in the following figure, the router sends multiple VCs of different traffic categories on an overcrowded OC-3 interface. In all test cases, the CBR VC with the highest priority retained a jitter-free cell interarrival time, and there was never a cell drop at the source as with VCs with lower priority. 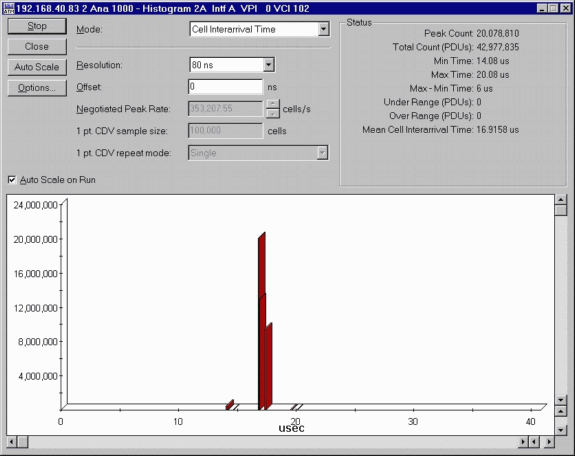 With the permanent virtual circuits (PVCs) of the ATM, the router and the ATM network are completely unaware of the traffic parameters used by the other entity. In some cases this allows you to specifically configure data traffic parameters or service categories that are not properly coordinated, as described in the previous paragraphs. When using SVCs (Switched Virtual Circuits), however, the ATM network exchanges information on data traffic parameters with the end system. Therefore, both systems must be prepared and configured in such a way that they specifically support the desired data traffic options. In order for this exchange to be completed successfully, the router must support the explicit CBR and VBR-rt CLI described above for real-time connections.

When using ATM-PVC, CBR and VBR-rt connections can be used immediately on any Cisco router that supports VBR. Depending on the platform and software level, there may be explicit command line support. CLI support for these real-time service categories is required instead for correct operation with SVCs.