Hawaii is a Polynesian archipelago in the Pacific and the 50th state of the USA. The islands of volcanic origin are about 4 to 5 hours by plane from the major metropolises (Los Angeles, San Francisco) on the west coast of the USA. Hawaii is associated with a mild climate, surfing, volcanoes, the hula and a relaxed lifestyle that attracts numerous tourists every year. Hawaii is much more diverse and offers numerous opportunities for travelers of various interests.

Hawaii consists of very many (approx. 1,000) islands of volcanic origin with different sizes. Seven islands are inhabited, only six of which are easily accessible to tourists:

Glowing lava on the Big Island

The outer shell of our earth is the lithosphere with the earth's crust and the lithospheric mantle. However, this is not rigid, but consists of numerous plates that slide against each other. Hawaii is on the Pacific plate. Strictly speaking, there are a number of more than 80 volcanic mountains in the Pacific, the so-called Hawaii-Emperor chain, which rise from the depths of the Pacific and by far not all of them reach the surface of the water.

One cause is one Hot spot, an almost fixed hot spot under the lithosphere, which melts upwards and shows volcanic activity on the surface, usually stratovolcanoes. The second cause is this Movement of the platethat does not make volcanism appear to be stationary. The Pacific plate moves slowly to the northwest at around 10 cm per year, the old volcanoes are extinguished and, relative to this, new ones are emerging in the southeast. Therefore, Kauai in the northwest of Hawaii is the oldest island with over 5 million years, Big Island with 400,000 years is currently the youngest and still active volcanic island. On top of it are the two highest mountains in Hawaii, Mauna Kea and Mauna Loa. Further to the south-east, about 30 km away, is the submarine volcano Lōihi, which in the distant future may rise out of the water and form a new island.

The archipelago is the work of submarine volcanic forces. The predominant type of rock is therefore basalt. Limestone occurs only in isolated places and to a small extent. While volcanic activity has long since ceased on the western islands and the craters have already been covered with lush vegetation, the same is still ongoing on the easternmost island, the Big Island. The tallest mountains on the Big Island exceed 4,200 m, but don't reach the snow line. Even small rivers are rare, and only Kauai has navigable ones (from very short distances). 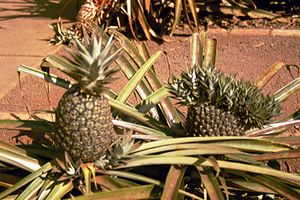 All sorts of pineapples thrive here

The colonization by plants and animals took place completely differently on these remote islands than on islands near the mainland. In this way, independent species could develop that had no natural enemies and were exterminated after being colonized by humans and the animals they brought with them. This happened already with the arrival of the Polynesians, who probably came from the Marquesas.

The archipelago was from James Cook discovered, which first landed on Kauai in 1778 and the archipelago Sandwich islands baptized. Hawaii was a kingdom then. However, on another visit to the islands, James Cook was killed. Due to the diseases brought in by its sailors, the population of around 300,000 people fell by around 80%.

In the beginning, relations between the Hawaiians and their eastern neighbor, the USA, developed quite well. Whalers had a good opportunity here to make a stopover on the voyage to the North Pacific, and the climate made it possible to grow sugar cane. When Queen Liliuokalani tried to reduce the influence of the Americans, she was overthrown in a coup of the plantation owners in 1893, the country was declared a republic, but annexed by the USA five years later.

In the meantime, the Hawaiians were a minority in their own country: due to white immigrants and the recruitment of workers for the farms from Asia, only about 14% are Hawaiians, but 24% are white and over 60% of Asian origin, mainly Japanese, Filipinos and Chinese. In 1959, Hawaii became the 50th state in the United States by referendum.

Hawaii was once a major hub for sugar, pineapples and whaling, but today it is mainly dependent on tourism and the US military. The majority of tourists are clearly the Japanese, for whom Hawaii is relatively easy to get to. 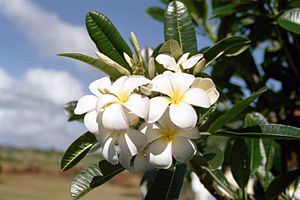 Plumeria: often the basis of a lei (wreath of flowers)

Today (unfortunately) practically nobody speaks pure Hawaiian anymore. The elderly often speak 'pidgin'. This is a mixture between Hawaiian and English and is very difficult or impossible to understand for English speakers. However, most of the Hawaiian population speaks pure English.

Incidentally, Hawaiian is the origin of the term "wiki" on this page: wikiwiki means "fast, fast" and describes how websites on a wiki can be changed. Hawaiian as a language sounds very melodic because it contains all vowels but only six consonants. Each consonant is followed by one or more vowels.

By plane from Europe with a stopover (usually on the west coast, depending on the airline), travel time approx. 20 to 25 hours.

The easiest way to get to the islands is by rental car, which is available at all airports. Car rentals are some of the cheapest in the US. On the other hand, insurance is extremely expensive, which is why booking from Germany is usually much cheaper.

Between the islands by plane with the local airlines (Hawaiian Airlines, Go! Mokulele, Island Air). Connections between the larger cities several times a day (sometimes every hour), to smaller towns two to three connections a day. Ferry services are only available between Maui and Lanai and between Maui and Molokai.

With the exception of the island of Oahu, there is practically no public transport on the islands. As a tourist, sensible travel is usually only possible by car.

Oahu has public buses that can be used to circumnavigate the island. They connect Waikiki Beach, Hoholulu, Kailua Beach and other beaches, shopping centers and attractions such as Pearl Habour. The route leads directly past various beaches and runs in parts in the immediate vicinity and with a good view of the sea. The buses run from around 8 a.m. to 10 p.m. You have to pay $ 2 to board the bus. Cheap multi-day tickets include available at the tourist offices on Waikiki Beach.

The food in Hawaii is typically American. The localities are characterized by the numerous fast food restaurants. In addition, you can also eat Polynesian, Asian or European food.

Tip: "Cheeseburger in Paradise" in Honolulu and Lahaina or grilled Hawaiian fish at Duke's on Waikiki Beach

Inexpensive food: In addition to all common American fast food chains - McDonald's, Subway, Starbucks, Quiznos, Carl Junior, there is also a HardRock Café and the Cheesecake Factory in the middle of the shopping street on Waikiki Beach. In addition to Walmart, there are other common American discounters for self-caterers. The prices are no different from those in the other American states.

Waikiki has a number of Polynesian bars that are mostly frequented by Japanese. There are also several Irish bars where you can meet Americans and visitors of all nations.

Caution is advised on the streets of Waikiki Beach from around 10 p.m. onwards, there are many hookers (prostitutes) who offer their services to tourists. Especially in the winter months, many are drawn from the colder Las Vegas to sunny Hawaii with the well-paying Japanese tourists. Honolulu is reminiscent of New York. Many Japanese tourists populate the streets. You can also find all the big brands such as Gucci, Louis Vuitton, etc. Here the inclined tourist will find a wide range of entertainment such as bars, discos, beach promenades with local artists.

Countless shopping centers on Oahu ensure that young and old, men and women, enjoy shopping. The spectrum ranges from exclusive boutiques with European designer labels to cheap discount stores (Sears, Walmart) for hobby sports (snorkeling equipment from around $ 15). Prices are generally no different from mainland America.

Cell phones (triple band, GSM 1900) work in all major cities, on the inhabited coastal areas and along the major roads. Roaming charges are not really cheap! It is usually worthwhile to organize a prepaid SIM card on site for stays of one week or more (possible from around 10 cents per minute (also for incoming calls!)). This is problem-free and relatively cheap for callers from abroad, since in the USA the caller pays the same fees for landline and mobile communications.

Compared to the states on the so-called "Mainland", ie other US states, violent crimes, so-called "violent crimes", are very low in Hawaii. However, the number of property crimes is disproportionately high. The Honolulu Police Department is facing a growing wave of property crimes: seven thefts and one break-in are recorded every hour on Oahu, and 20 thefts from or from cars are reported every day. Camping at Waimanolo Beach (Oahu) is not recommended, as cars are often broken into there.

The climate is overall mild and pleasant. Due to the north-east trade winds, the sides of the islands facing the wind are more humid and tropical, while the sides facing away from the wind are more dry. The mean temperatures in summer range from 29 ° C - 32 ° C, those in winter from 18 ° C - 21 ° C.