How many types are vegan

Simply put, biodiversity means «diversity of life». The underlying task is to preserve our ecosystem and the most diverse types of living beings and genes. So in order to preserve the diversity in nature, some factors speak in favor of a vegan diet.

Bison, antelopes and other animals that rely on pasture areas are increasingly being displaced by herds of cattle. Uniform pastures are created for the cattle herds (grass monocultures), which lack the natural diversity of the flora. The cattle themselves have a devastating effect on the soil. In contrast to antelopes, they have to go to the watering holes every day and thus additionally compress the soil due to their heavier weight.
Antelope droppings are compact and spherical in shape. The nitrogen is retained in it and thus fertilizes the soil sustainably. Cattle, on the other hand, have very damp excrement that spreads flat on the ground and allows a large part of the nitrogen to evaporate due to the heat. This creates ammonia, which also pollutes the atmosphere.
This removes a valuable nutrient from the soil and enriches the atmosphere with ammonia, which later falls on the earth again as acid rain.

In Central America, 40 percent of the entire rainforest has been cleared or burned down over the past 40 years, mainly to preserve grazing land or to grow animal feed. In addition, fishing in the world's oceans has been so strongly promoted that here too the limits have been reached and the fish stocks can no longer recover.

Animal farming produces an enormous amount of manure, which is then dumped on the meadows. The permanent fertilization with faeces and the resulting increased nitrogen content in the soil kill many microorganisms, which reduces soil fertility. As a result, the biodiversity of flora and fauna is increasingly reduced. "According to some experts, up to 35,000 species disappear forever from the earth every year."1 Other causes for this problem are also the use of more and more poisons (herbicides, pesticides, fungicides) in agriculture.

For ten years now, everything in the food industry has been about fish. Worldwide consumption levels are constantly increasing. In Switzerland, the increase from 2001 to 2005 was a good 15%; worldwide consumption has increased sixfold since 1950.2 Of course, this has a huge impact on the fish population itself, but also on the entire ecosystem. The stock of predatory fish species such as tuna and swordfish has shrunk by 90% in contrast to the time when there was no industrial fishing. Without their natural enemies, it becomes easy for pests such as jellyfish to reproduce unhindered and thus destroy the ecological balance of the oceans.
An additional problem for the biodiversity of the fish comes from the growing breeding facilities in which millions of animals live. Again and again, breeding animals flee from these farms to freedom, where they then mate with the wild fish. But if the number of fleeing farmed fish is constantly increasing and that of wild fish is constantly decreasing due to overfishing, the result is a spiral that leads to the extinction of wild genes more quickly with each new crossing. More about the fish in the sea: Overfishing

Biodiversity is being lost

What is slowly becoming apparent in the case of fish has long been a reality for farm animals on land. Because for economic reasons, the livestock breeds with which the most can be earned are mainly bred. This deliberate displacement of the original races by the few farm animal races automatically reduces the biodiversity.
The problem is also compounded by the clearing of the rainforests. Because the rainforests are home to an estimated 80% of all animal and plant species living on earth. "The primeval forest is literally being eaten up by the cattle," says Tobias Riedl, Greenpeace forest expert. "This madness must be stopped immediately, otherwise it will have catastrophic consequences for the global climate and the preservation of biodiversity." 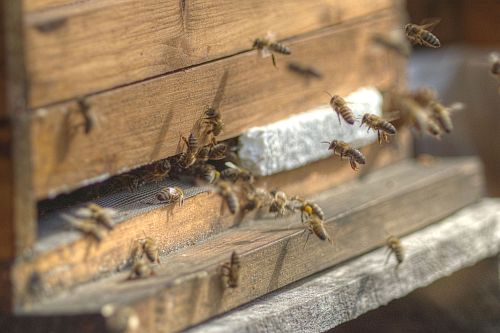 How useful the small bees are for humans has only been noticed since the topic of bee deaths appeared in the media. The rapid decline of more and more bee colonies shows most clearly where the reduction in biodiversity is leading. Here, too, breeders have specialized in the most profitable bee species and bred and distributed around 20 subspecies of this honey bee. The beekeepers' honeybees, which are genetically almost identical worldwide, are now displacing nature's other pollinating insects, which do not bring people any direct profit.

The consequences of this have been visible for a long time: one species of bees is increasingly displacing all other species. Genetic impoverishment follows from this. Diseases among bee colonies are becoming more and more common and spreading like an epidemic. The disease resistance of the bee trunks is decreasing more and more. More on this: honey.

As already mentioned, the specialization in certain productive farm animals ensures that the wild animal species become more and more extinct. This fact is further promoted by genetic engineering. Here, too, plants are deliberately manipulated in such a way that they are more resistant to the poisons sold by the manufacturers than their natural counterparts. This is particularly evident in the case of forage crops such as soy and rice, which are mainly affected by the manipulation. Original species that are not up to the recommended poisons of the genetic engineering manufacturers are gradually being displaced by the genetically manipulated plants. This ensures that natural species disappear from the earth and the farmers are dependent on the genetically modified seeds of the manufacturers. In this way, an ecosystem is created that only consists of monocultures.

In the name of biodiversity, it is particularly important to point out that the diversity of life cannot include killing other living things. Nevertheless, it does not seem easy to find agreement in this diversity. It is not for nothing that there is a division into so-called animal welfare and species protection organizations.
While species protection deals exclusively with animal species threatened with extinction, animal welfare organizations are primarily concerned with the well-being of pets. Whereby the livestock are hardly protected by anyone, but - as the name suggests - attention is only paid to how they can be better used. The subdivision into these different groups alone shows that society has defined for itself what is worth protecting and loving.
Vegans and vegetarians are convinced that our compassion for other living beings cannot be reduced in certain ways. Because the task of humans is to care for all animals well and responsibly. Veganism and vegetarianism are therefore the clearest signs against the exploitation and waste of biological diversity, also when it comes to biodiversity. By consciously deciding which foods are good for ourselves and our environment, vegans and vegetarians make the most important contribution to maintaining life.