The bromination of phenol is easier than that of benzene

With the influence of primary substituents, the following three effects can be distinguished:

These three effects can have two different types of effects:

If the benzene ring already has functional groups such as -OH, -NH2, -COOH, -CH3 inter alia is connected - with so-called primary substituents - so these have an influence on the electron density in the benzene ring, either through a positive or a negative inductive effect.

Effect on the benzene ring

Primary substituents with a + I effect increase the electron density of the benzene ring and make the formation of the π complex easier = activating effect. The bromination of toluene is therefore faster than the bromination of benzene.

Critical note for experts:
Inductive effects actually only affect the system of σ electrons; for thisE. but the π electrons of the benzene ring are responsible. Nevertheless, the bromination of toluene C takes place6H5-CH3 faster than the bromination of benzene.

On my lexicon page "Inductive Effect" you will also find an overview of which groups have which effect.

For experts:
Note that some groups can change their charge when the pH of the solvent changes. For example, a neutral COOH group becomes a negative -COO- - Group, if you add a base (proton acceptor). From an NH2-Group can generate an -NH when adding an acid (proton donor)3+-Group become.

I have also designed this topic for my students as a one-page worksheet, which you can download here: "Inductive Effects".

As always in such situations, you should quickly look for other influencing factors. In the case of electrophilic substitution, not only inductive effects play an important role, but also the so-called mesomeric effects. I explained what mesomeric effects are on my lexicon page "Mesomerism". The explanation in the SimpleChemics film on mesomerism is even better.

Let's take a look at the aniline molecule:

We can draw five different boundary structures or resonance structures of the aniline molecule, with three of them a so-called charge separation occurs. The positive charge is on the nitrogen atom, while the negative charge is concentrated on three carbon atoms of the benzene ring. These three carbon atoms are almost predestined to take up a positive charge when the sigma complex is formed in the course of an electrophilic addition.

This positive mesomeric effect (caused by energetically favorable resonance structures, also known as the + M effect) not only activates the electrophilic substitution itself (i.e. it reduces the activation energy for the formation of the sigma complex and thereby accelerates the reaction), but it also directs nor the second substitute. In the bromination of aniline, 2-bromo-aminobenzene and 4-bromo-aminobenzene are preferably formed.

The C = O double bond of the benzoic acid is responsible for the fact that negative charges are withdrawn from the benzene ring, at least in three of the five boundary structures. This mesomeric effect decreased the electron density in the ring and is therefore referred to as the negative mesomeric or -M effect.

The -M effect ensures that the positive charge is preferentially in the ortho and para position. These positions were special with the + M effect Cheap for the formation of the sigma complex, with the -M effect these positions are special unfavorable. The result: Primary substituents with an -M effect direct the second substituent away from the ortho and para position, leaving only the meta position.

I have also designed this topic for my students as a one-page worksheet, which you can download here: "Mesomeric Effects". 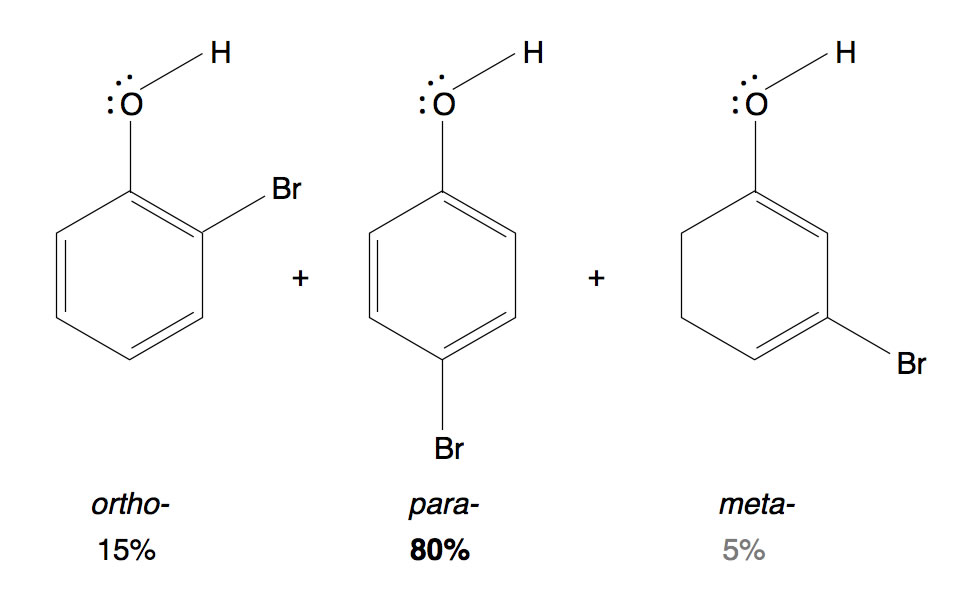 The interesting question, however, is why the para product is predominantly formed. Shouldn't the same amount of ortho- and para-products be created?

A new effect comes into play here. In addition to the inductive and the mesomeric effect, there is always a steric effect in chemical reactions. In many simple reactions, the steric effect does not play a particularly important role, but in this example it does. The O atom of the OH group is quite electronegative, as is the Br atom. You have to imagine that both atoms are surrounded by a negative cloud of charge. Then the ortho product is energetically less favorable than the para product, because with the ortho product the two negative charge clouds are closer to each other than with the para product.

I have also designed this topic as a one-page worksheet for my students, which you can download here: "Conducting Effects".