Why calibrate an injector 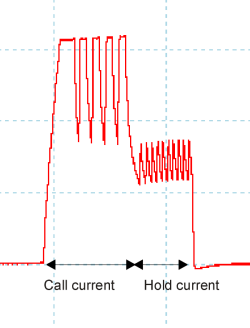 Delphi injection valves are immediately recognizable by their pencil-thin shape and the plug-in multi-connector connections. You can find them among others. in vehicles made by Ford, Renault and Nissan.

As with all common rail systems, there are different injection phases:

As soon as the injector solenoid valve is supplied with power, the needle in the injector rises and the fuel is injected, which causes the pressure in the common rail to drop slightly.

This on Figure 3 visible initial power supply is the trip current. It is higher than the holding current required to overcome the inertia of the valve needle.

At the end of the injection phase, the power supply to the solenoid valve is switched off again and fuel injection stops.

If the fuel requirement suddenly changes, for example because the gas pedal and thus also the engine are (almost) completely relieved, the ECM / IDM causes the fuel pressure to be discharged through the injection nozzle into the discharge circuit.

During this phase, the injection valve pulsates several times (see example curve 3). If the time base were extended, many of these pulses would be seen before returning to normal idle speed. The three current peaks shown show that there is a tripping current but no holding current. By diverting the fuel into the diverting circuit, the injection of fuel into the cylinder is prevented.

If defective Delphi injectors are identified and replaced, the new injectors must be re-encoded in the ECM / ICM using a scan tool, as they are individually calibrated.