What are the chemical properties of Advil

NSAIDs Ibuprofen is an active ingredient from the group of non-steroidal anti-inflammatory drugs with analgesic, antipyretic and anti-inflammatory properties. The effects are based on the inhibition of prostaglandin synthesis by inhibiting the cyclooxygenases COX-1 and COX-2. Ibuprofen is used for the treatment of pain, fever, and inflammatory diseases. The non-retarded tablets are usually taken up to three times a day. The most common possible adverse effects include gastrointestinal complaints, central nervous side effects, and skin rashes. Like other NSAIDs, ibuprofen can rarely cause serious side effects.

Ibuprofen is available in the form of film-coated tablets, as an oral suspension, soft capsules and granules, among other things. It is also used externally as an ibuprofen cream.

Ibuprofen was developed in the 1960s by the Boots Pure Drug Company under the direction of Stewart Adams in Nottingham, England. It went on sale in the United Kingdom in 1969. Brufen® is the original. Ibuprofen is one of the most commonly consumed pain relievers around the world today.

Ibuprofen (C.13H18O2, Mr = 206.3 g / mol) belongs to the group of propionic acid derivatives. It is a racemate consisting of equal parts of the S.(+) - and R.(-) - enantiomer. The S.(+) - Enantiomer Dexibuprofen is mainly pharmacologically active and is also marketed. However, chiral inversion also takes place in the body.

Ibuprofen is found in drugs as an acid, as → ibuprofen lysinate, → ibuprofen arginate or → ibuprofen sodium. The effect occurs much faster if ibuprofen is taken as a salt instead of an acid, because it dissolves better and is therefore absorbed more quickly. 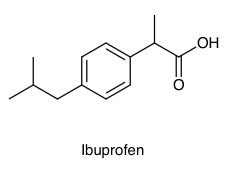 ) has analgesic, antipyretic, anti-inflammatory and mildly antiplatelet properties. The effects are based on the inhibition of cyclooxygenase (COX-1 and COX-2) and the inhibition of prostaglandin synthesis. Ibuprofen has a short half-life of only about 1 to 3 hours.

Mechanism of action of NSAIDs, click to enlarge. Illustration © PharmaWiki

For the treatment of fever, inflammatory diseases and pain. The areas of application include, for example:

Ibuprofen is also approved in some countries for the treatment of a hemodynamically effective open ductus arteriosus botalli in premature babies before the 34th week of pregnancy (Pedea®).

According to the specialist information. In self-medication, the maximum daily dose for adults is 1200 mg, corresponding to 200 to 400 mg three times a day (dosing interval 4 to 6 hours).

The drugs for self-medication are only approved for short-term treatment of a maximum of three days.

The doses for children are lower and depend on their body weight.

If you have a sensitive stomach, it is recommended to take it with a meal. Due to the possible undesirable effects, the dose should be kept as low as possible and the duration of therapy short.

The most common possible adverse effects include:

Like other NSAIDs, ibuprofen can rarely cause serious side effects. These include stomach and intestinal ulcers, perforations, bleeding, cardiovascular diseases, high blood pressure, hepatitis, life-threatening skin reactions and kidney dysfunction up to and including kidney failure.

Conflicts of Interest: None / Independent. The author has no relationships with the manufacturers and is not involved in the sale of the products mentioned.

© PharmaWiki 2007-2021 - PharmaWiki provides independent and reliable information about medication and health.
This article was last changed on 7/12/2020.
Imprint and data protection declaration
Show products for this page
<?