The screen resolution indicates how many pixels the image display consists of. The more pixels, i.e. the greater the resolution, the more details can be seen on the screen or the more space is available for displaying objects.

The resolution is given in different notations, values ​​and units. For example, a digital camera uses 12 megapixels. This is the product of the width times the height. For example 4,256 x 2,848 pixels. The product is rounded off with 12 megapixels (MP).
When it comes to screen resolution, however, it is not the product that is of interest, but the number of pixels per side length. So width and height. Since we prefer the widescreen display, our screens are wider than higher. Accordingly, more pixels are specified for the width than for the height.

The screen size is specified in centimeters (cm) or inches ("). Measurements are taken from the upper right corner to the lower left corner. Depending on the manufacturer, there can be significant differences in the screen diagonal. The real screen diagonal is determined by the overall extent of the Because the old picture tubes are larger than the actually visible area, the size of the picture tube is often given for advertising purposes, although the visible area is smaller.

When evaluating a screen, the maximum possible resolution must be taken into account in addition to the screen diagonal. Because both values ​​are not necessarily related. Basically, a screen should be selected according to which resolution is set.
If a resolution of 1,600 x 1,200 pixels is to be set, screens with 20.1 ", 21.3" and 23.1 "come into question. But be careful: While the display appears optimal on a 21.3" screen, it is too big for a 23.1 "screen and maybe too small for a 20.1" screen. The fonts and symbols are noticeably smaller in PC operation. This is at the expense of ergonomics.
The same problem arises with other resolutions and screen sizes.

In addition to the 4: 3 displays, which have now become unusual, there are the popular widescreen displays. A distinction is made between 16:10 and 16: 9. The 16: 9 format was reserved for flat screen TVs for a long time. PC displays were given the 16:10 format by default. But 16: 9 panels can be produced more cheaply. The lower costs are passed on to customers. In the meantime, all screens, regardless of whether they are for TV or computer, have been given the 16: 9 TV format. The resolution of computer monitors is then adapted to the TV format. That is why flat screens with 18.5 inches (1,366 x 768 pixels), 21.5 inches (1,920 x 1,080 pixels) and other crooked values ​​are the rule.

Extra-wide 21: 9 displays offer plenty of space for many windows or allow uninterrupted film enjoyment without black stripes, above and below or on the sides. 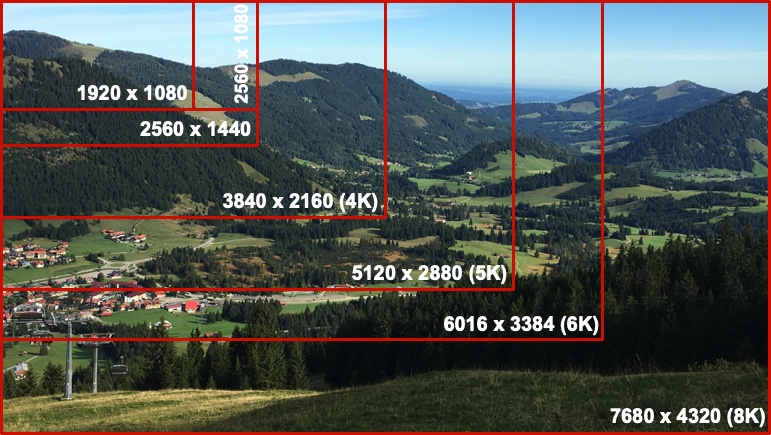 Since the appropriate content is still missing, all 4K devices extrapolate internally from Full HD to 4K. And just because a video is 4K doesn't mean it has to be of high quality. If the video is heavily compressed, it can look even worse than full HD video.

And still you should prefer a 4K television when buying a television, because the production of the 4K panels is not much more difficult than the large Full HD panels and therefore the prices are only slightly higher. In addition, the display manufacturers are striving to deliver a crisper color display for 4K panels in order to have better sales arguments for 4K televisions. That alone justifies the additional price.

High Dynamic Range, or HDR for short, describes images with a high contrast range. In concrete terms, this means that the images have much more contrast and stronger colors. For example, a very dark black and a very light white.
This real HDR should not be confused with the 3D effect of the same name. It just simulates this impression.

The first graphics card, from the 80s, was not a graphics card in that sense. She could not control the individual pixels on a screen. The display on the screens was only possible in two colors (monochrome).
With a resolution of 720 x 350 pixels (!) It was only possible to display a collection of pixels on an area of ​​9 x 14 pixels in a text mode. This resulted in a text resolution of 80 columns (characters) and 25 lines. For character-oriented applications such as word processing and spreadsheets, this was more than sufficient.

The VGA standard is practically still a current standard. This only refers to the pure text mode, but it can be used, for example. B. configure the BIOS.
The standard VGA graphics cards support a resolution of 640 x 480 pixels with 16 colors. Depending on how large the image memory of a graphics card was, z. B. 256 or more colors were also possible.

The further development of the VGA standard enabled a resolution from 800 x 600 pixels with 256 (standard), 65,536 (HiColor) or 16.7 million (TrueColor) colors.
Today's graphics cards are no longer tied to one resolution. However, the VGA and SVGA standards are consistently adhered to. Every operating system gets every graphics card to run with a resolution of at least 800 x 600 and 256 colors. Provided that it is not defective.
In normal operation, the resolution, the number of colors and the 3D performance almost only depend on the size of the image memory of the graphics card.

Everything you need to know about computer technology.

Everything you need to know about computer technology.