What is the allure of jazz music 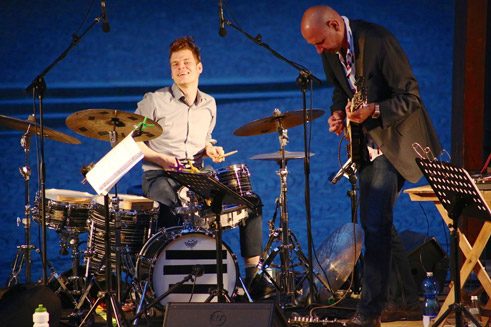 In 2015, German jazz presented itself with the brilliant return of the big band and an exploding variety of the scene. The bass clarinetist Rudi Mahall calls a quintet from Berlin rich through jazz. This is a deliberately ironic comment from him, Mahall's sarcastic description of the fundamentally precarious economic situation of jazz musicians in Germany.

But how do the majority of jazz musicians in this country actually live and work today? This is what a study started in 2015 on the living and working conditions of jazz musicians in Germany wants to find out; an online questionnaire by the Union of German Jazz Musicians together with the Darmstadt Jazz Institute and the IG Jazz Berlin. The study is scientifically supported by the Institute for Cultural Policy at the University of Hildesheim. According to the Darmstadt Jazz Institute, around 2,100 jazz musicians took part in this online survey. The first results should be available in mid-March 2016.

Do jazz musicians, as the general prejudice is, mostly come from families with a high level of education? How high is the average salary in Germany? Questions that this study aims to answer for the first time with reliable empirical data. Of course, nothing will change quickly in terms of living and working conditions, either, but it can provide important insights for the various actors involved in music and events as well as in the press and the media.

Celebration of an ore melodist

2015 was Eberhard Weber's big year. The legendary bassist, who grew up in Esslingen, celebrated his 75th birthday and was presented with the (first-time) jazz prize of the state of Baden-Württemberg for his life's work. Just a few months later, Weber received another honor - again for his life's work: an echo jazz.

At the Great Jubilee Concert in Stuttgart (in which the author was involved as a recording radio editor), Weber's renowned companions such as Jan Garbarek, Gary Burton and Paul McCandless bowed to the bass legend by performing Weber compositions with the SWR -Big band played. It became clear how strongly Weber's electric double bass playing and his sound aesthetics had rubbed off on American and European jazz concepts. This may have had a particularly prominent effect on the compositional and guitar style of Pat Metheny, who mentions Weber as a formative influence and thanked his idol with a 31-minute suite.

Metheny's first big band work Homage integrates samples from Weber solo performances and takes this material as the basis for a jazz orchestral composition that is unique in its melodic and harmonic architecture. Eberhard Weber laconic: "I can't play bass, but I know how it's done."

German in the world of Oo-Bla-Dee

But 2015 was also the year of great new talent. One of them: Erik Leuthäuser from Freital in Saxony, who translates the German language into the world of bebop from the land of Oo-Bla-Dee. Born in 1996, he is a master of vocalese - the musical wording of pieces and solos that were originally purely instrumental. “It appealed to me that there was no such thing in German as writing instrumental pieces or improvisations. So far, this has only been available in English from Eddie Jefferson or Jon Hendricks, for example. That has always impressed me very much. "

Development of the "Third Stream"

In 2015, young German jazz was as diverse as it was radically multistylistic; whereby there is a noticeable tendency to creatively transcend differences between genres. This can be experienced in a very sensual way in projects such as Sebastian Stern as a Symphonic Society or Roger Hanschel's work with the Auryn Quartet. Here playing attitudes from the world of jazz and classical chamber music meet. Jazz and string quartet as a successful encounter full of mutual challenges. A kind of “New Third Stream” is created - a third stream that is fed from the inflows of jazz and classical music.

Speaking of jazz and classical art music: Michael Wollny's triumphal march through the concert halls continued in 2015. With his successful album Night drives (ACT) - a romantic journey into the world of dark dreams - the Leipzig-based pianist is dedicated to music of silence and sound-conscious reduction.

Of course, all of this can hardly hide the fact that Germany's jazz musicians continue to struggle with adverse conditions. More and more young improvisers studying jazz at Germany's music academies are competing for opportunities to play in clubs, the number of which stagnates and does not grow in proportion to the number of graduates.

In the midst of this not always rosy situation of German jazz, a surprise burst in 2015: The jazz funding of the state of Baden Württemberg was increased by 120 (sic) percent compared to the previous year. 338,000 euros more than in 2014 were thus available. The additional funds are to be used to set new priorities in the promotion of young talent, in the support of professional musicians and in the promotion of festivals and sponsoring associations.

A funding approach that musicians in other federal states can only dream of, but which could have the character of a model. It includes the support of concerts outside Baden-Württemberg as well as intercultural projects, such as the promotion of the Ulm Initiative Young Jazz Music from the Danube Region, a new festival for jazz and improvised music where young jazz musicians from the Danube countries meet can. The JazzFest Berlin presented itself in its 51st year with a new artistic director: the British journalist Richard Williams relied on a decidedly cosmopolitan program. The new start - with Cecile McLorin Salvant and the Diwan der Continenten orchestra (with 22 musicians from many different nations and cultures living in Berlin) - was positively received by the audience.

Play like a waterfall. There is something shimmering and startlingly dense about his rhythms. Christian Lillinger is one of the exciting and original drummers in experimental improvisation music. In 2015 he surprised everyone with two projects. In his sextet Grund, styles of New Music and free improvisation collapse into sounds that appear wild and chaotic on the surface, but in reality are structured just as compositionally as spontaneously. In contrast, Amok Amor (with bassist Petter Eldh and saxophonist Wanja Slavin) is a pure improv project, with an overwhelmingly high-speed appearance: a band that generates pure energy in a heated exchange between dispute and agreement.

The projects of Christian Lillinger, Julia Hülsmann, Kalle Kalima and many others stand for the unbroken attraction of the jazz magnet Berlin, a scene with great appeal far beyond national borders. Of course, the impulses that emanated from the Cologne scene in 2015 are no less strong. The Klaeng collective with its Klaeng Festival, the circle around the Club Subway, the Winter Festival and artist-individualists like Jonas Burgwinkel, Angelika Niescier and Christian Lorenzen speak for a high degree of self-organization and creativity of the musicians in NRW.

Fountain of youth for a fossil

Another trend in German jazz from 2015: a striking number of young jazz orchestras are on the rise. A fossil awakens, the big band, long pitied as a discontinued model because it is difficult to finance, is making a fulminant return. It is mostly young enthusiasts, ambitious jazz students and professional musicians who are fueling this renaissance: in Hanover the Fette Hupe orchestra with Jörn Marcussen-Wulff, in Hamburg / Leipzig Lars Seniuk and the New German Art Orchestra, in Cologne the Subway Jazz Orchestra with Tobias Wember, in Berlin Malte Schiller with Red Balloon. They and many other large ensembles represent the hunger of musicians to express all the diverse experiences they have in their lives with the differentiated color palette of a jazz orchestra and to transform them into a new European big band language.

It fits in with the fact that, regardless of this development, the following message came up at the end of the year: There were two Grammy nominations for the renowned WDR Big Band and their Cologne project with the American arranger and trombonist Marshall Gilkes. The Cologne-based company was nominated for the most coveted prize in the music world in the Best Large Jazz Ensemble Album category and as Best Instrumental Composition (for the work Vespers).

Despite all the adversities that still exist for German jazz, things are looking pretty good: Jazz made in Germany is also appreciated in the motherland of jazz.