Who was the first queen of Japan

The morning ceremony of Queen Himiko

Himiko is a figure in the second Japan series of the mosaic from 1976.

Himiko was the first queen known by name in Japan. She lived from around 170 to 248 and was a spiritual guide and shaman of her people.

[Edit] Appearance in the mosaic

First information about Queen Himiko can be found in the Abrafaxe in the library of Nikko Monastery. There, Brabax can study two Chinese paper rolls with a report from the Wei Zhi chronicles about Queen Himiko. He learns that the queen comes from the land of Yama-tai, which was in what is now Nara. After a civil war, it united thirty countries into a federation. She mastered Kido, a shamanic magic. She lived with a thousand servants in a palace that was protected by soldiers. The ruler performed ceremonies with a mirror in honor of the Sun Queen Amaterasu. This mirror was broken by three messengers from the Sun Queen's stepson Iniy.

In Tokyo, the Abrafaxe meet the scholar Fukuzawa Yurichi, who deals with the legendary Queen Himiko and her lost mirror. He reports that during the queen's lifetime there were two factions of priests: the Sai-ryu and the To-ryu. After the queen's death, there were constant arguments between the two parties over the destroyed mirror. The Sai-ryu hid the mirror pieces in three bronze boxes because, according to an ancient prophecy, if you put them back together, they can change the course of history. 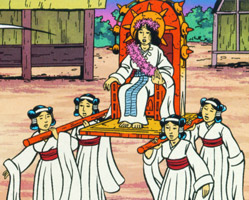 The Abrafaxe finally meet Queen Himiko when they are assembling the three shards of mirrors from the bronze boxes. With a time jump through the mirror, they land during a ceremony in the Himiko's Hall of Mirrors. The mirror, venerated there as a sanctuary, breaks into three parts with a loud bang. The Sai-ryu priests claim that the evil stepson of the goddess Amaterasu sent them to destroy the mirror. Himiko recognizes Brabax, who was depicted on the mirror as the messenger of the gods. She leads the Abrafaxe into the ruins of Achetaton. She explains that this place was built by her ancestors and destroyed by a terrible earth dragon. They discover a deep well into which they would like to throw the Kamon. However, Himiko warns them to approach the well. She invites her guests to her palace so that they can tell her about Sibylla and her adventures in Egypt. In the evening, the Abrafaxe will be picked up by Haino and two companions. The queen had instructed her to accompany her to the palace. But on the way they are locked in sacks and thrown into the well of Achetaton.

[Edit] Himiko appears or is mentioned in the following mosaic booklets