What's wrong with the public schools in America

Schools in the USA

As a rule, one can expect from the expensive private schools that responsible children and young people are educated. Every American who can afford it sends his child to a private educational institution, whose equipment, faculty, etc. are usually many times better than in public schools. Parents often go into debt for their children's good education.

A list of private schools in the state can be found here: www.privateschoolreview.com

Public schools in the US

Until a few years ago, the statistics on the general education of schoolchildren showed a steady downward trend. The American President George W. Bush issued the “No child left behind act” on January 8, 2002. 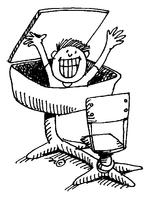 This “No child left behind act” is intended to help the public school system on the jumps and, in particular, obliges the states to periodically present measurable results for raising the level of education in the individual schools.

However, the public school system and especially its schools cannot be lumped together. They do exist, the well-organized and well-developed public schools. Schools that have a large company as a school sponsor are of course better off financially than those that have no or only limited sponsorship money.

A good English language site on US public schools is available at: www.publicschoolreview.com

This article is an excerpt from Live and work in the U.S.

Did this article help you?

do you have feedback, an update or a question about this topic? Comment here: