What are saturated images

What is color saturation?

Philipp Otto Runge (1777–1810) developed a color model as early as 1809 that differentiated colors according to hue, brightness and saturation

In many color models, colors are described by their hue, lightness and saturation, and we also use these terms when we talk about color rendering in photography: Images appear too light or too dark, have a color cast that makes the hues warmer or colder colors, and they are too little or too saturated. As we know from physics classes, the hue is at least loosely related to the wavelength of light, and the perceived brightness obviously depends on the light energy. However, color saturation was never mentioned in physics class, and in fact it is not a physical quantity. But what is it then?

By choosing a specific wavelength, we can create almost any hue - except purple, which has no wavelength. We can change the light intensity and thus create different bright colors, but each of the spectral colors, whichever wavelength and which brightness it has, is always completely saturated. You can only understand what constitutes a saturated or unsaturated color if you know how we perceive colors.

and how we see them

We only have to use the prism as an aid because our eyes do not have a pronounced ability to differentiate between wavelengths. The color-sensitive sensory cells are each sensitized to one of three broad wavelength ranges that roughly correspond to the colors red, green and blue. Since the sensitivity ranges of the three types of cells overlap, we can, for example, recognize the wavelength of yellow light from the fact that both the red and green sensitive cells respond to it, and we can distinguish whether it is more of a signal from the ratio of the signals from both cells Green-yellow or a yellow-orange. A mixture of pure red and pure green light would have the same effect, although the wavelength of yellow light does not occur in it. There are infinitely many mixtures of light of different wavelengths that produce exactly the same sensation, and therefore there is one metameric Color perception is very unreliable when it comes to determining wavelengths. Transferred from optics to acoustics, it would be as if we could not hear different tones and thus no longer recognize melodies, but only differentiate how the frequencies of the musical instruments are distributed over the bass, treble and middle. 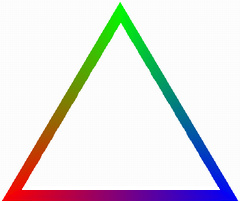 However, this lack of precision now has the advantage that we can create the impression of a variety of colors with very simple means: three basic colors are sufficient to fool our eyes into a complete color spectrum. If our color perception were more accurate, then color photography and color printing, but also painting, would require much more effort. A monitor or a display, for example, only generates light in the colors red, green and blue, from which all the intermediate tones result for our eyes solely through different mixing ratios of two basic colors. We perceive different proportions of red and green as orange, yellow or yellow-green and mixtures of green and blue as variants of green-blue. If you mix red and blue, the color circle closes over purple and purple. The interface forms purple, to which no wavelength corresponds, because seen as wavelengths, red follows infrared and violet follows ultraviolet; only our coarse color vision allows the longest and shortest wavelengths to meet in the color purple, so that a color circle is formed.

To illustrate the contribution of the third basic color, we assume a mixture of 100 percent red and 50 percent green, which results in orange. The proportion of blue is initially zero. If we gradually add more and more blue to this saturated orange, the mixture doesn't get bluer - it keeps its orange hue, but becomes lighter and paler. The originally strong orange is whitened; it loses its saturation. The loss of saturation continues until the proportion of blue reaches the proportion of the second-lightest green to date, i.e. 50 percent. If you add more blue, blue becomes the second lightest basic color and, together with the still dominant red, determines the hue that we now perceive as violet. The weaker green no longer affects the hue, but rather the saturation. Generally speaking, it can be said that the two lightest basic colors and their mixing ratio always determine the hue and the weakest basic color determines the saturation. The brightness results from the brightness of all three basic colors.

How to control saturation

It looks different if not two, but only one basic color dominates and the other two are almost equally bright. For example, a mixture of 90 percent red, 50 percent green and 45 percent blue is perceived as pink, i.e. as pale red. If one were to reduce the proportion of blue to increase the saturation and to compensate for more red and more green, the hue would get an orange cast. In such cases you have to reduce the proportion of the second lightest color instead of increasing it. You can visualize this in such a way that you stretch a rubber band over the tone scale on which you mark the values ​​for red, green and blue. If you now pull the elastic band apart at the points of the lightest and darkest basic color in order to increase the saturation and at the same time to compensate for the loss of brightness, then the marking of the second lightest color moves up or down, depending on whether it is closer to the lightest or the darkest base color.

What exactly the saturation regulator of an image processing program does, however, differs from application to application and is usually not documented. The row of images above shows the original on the far left and the maximum saturated versions that can be created in Adobe Photoshop CS3, Corel Paint Shop Pro Photo X3 and Binuscan PhotoRetouch Pro. It is noticeable that PhotoRetouch Pro has only slightly changed the almost neutral motifs of scarf, coat and clouds, while the programs from Adobe and Corel have increased the saturation everywhere the same.

How Much Saturation is Enough?

In nature, strongly saturated colors are more the exception than the rule. Many natural dyes reflect light in the wavelength bands of all three primary colors, and even when the reflected light is saturated, the atmospheric haze, backlight or scattered light attenuate the colors. If it were all about true-to-life color reproduction, then the images should not be too saturated. There are several reasons why photographers often want more saturated images. Our brain takes into account the effect of factors such as the haze, which makes distant subjects appear pale, which is why we believe we see their colors as they would appear under ideal conditions - provided, of course, that we know the actual color. In addition, our memory is not very reliable for fine color gradations, and so we often do not “remember” the color actually seen, but rather a prototypical leaf green, an ideal blue sky or a standardized skin tone. With the exception of the skin color, the so-called “memory colors” are highly saturated, and so we find the color reproduction of less saturated pictures unsatisfactory, no matter how true to nature.

The compact digital cameras in particular therefore usually increase the saturation in order to produce subjectively better images with more beautiful colors. This trick is also used by some manufacturers to enhance an objectively inadequate image quality, while high-quality cameras in particular often show a more lifelike and therefore less saturated color reproduction. In direct comparison, the camera with the poorer image quality can then produce the more beautiful images, at least at first glance. 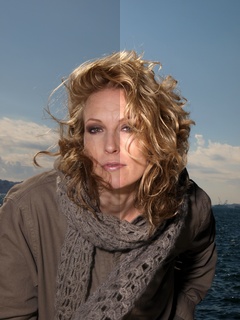 Even if one should avoid exaggerations, there is usually nothing to prevent a somewhat stronger color saturation than true to the original, because subjectively, such slightly oversaturated images appear more natural. A tonal value correction, in which the black and white points are set in the image, or a slight increase in contrast by bending the gradation curve is usually sufficient. An increase in the contrast of all three color channels also pulls the values ​​in the lightest and darkest color components of a pixel apart and thus increases the color saturation at the same time. In order to change the contrast without affecting the color saturation at the same time, one would have to convert the image into a color model such as Lab, in which there is a pure luminance channel, in order to then edit the contrast of this channel alone.

The controls for the color saturation, which are available in image editing programs and raw converters, should only be used very carefully to increase the saturation. One of the problems that a general increase in saturation brings with it is its effect on skin tones: while many subjects benefit from a higher saturation, a more saturated complexion appears unnaturally red, as if people were sunburned. Adobe Lightroom, for example, offers in addition to the saturation slider, a slider for "vibrancy" that increases the color saturation, but leaves out skin tones and is therefore generally preferable. In addition, you can selectively increase the saturation for certain color tones, for example a stronger sky blue without distorting the reproduction of the other colors.

Another disadvantage of a general increase in saturation is that it can lead to a loss of tonal values. If you reduce the proportion of the weakest base color in order to increase the saturation, you have to lighten the lightest base color further in order to preserve the overall brightness. If this basic color is already very light, however, it would have to be increased to more than 100 percent, and the result would be overexposure in this color channel (see Why is the sky turquoise?), Which originally leveled different tonal values ​​to a uniform 100 percent. The colors shift; not only differences in brightness, but also color differentiations are lost. If you increase the saturation, you should therefore always keep an eye on the RGB histogram, i.e. the tonal value distribution in all three color channels, in order not to exaggerate the effect. mjh

Further articles on the subject of "photo practice"