What has India achieved in Doklam

The border conflict in the Himalayan region, which has been simmering for weeks, is coming to a head. China's army has shown a "high degree of restraint" so far. The state news agency Xinhua quoted a spokesman for the Ministry of Defense in Beijing as saying that there are limits to goodwill. He demanded the immediate withdrawal of all Indian soldiers from the Doklam area (Chinese: Donglang). The Chinese armed forces are determined to protect the country's territorial sovereignty and security interests, he said. The Chinese Foreign Ministry accused India of having reinforced troops and logistics on the Doklam Plateau for more than a month.

According to Indian information, 300 soldiers face each other at a distance of 150 meters in the region. The Chinese armed forces reportedly fired a missile at the Indian troops this Friday.

The latest dispute revolves around the construction of a road by the Chinese People's Army in an area that has been claimed by both China and Bhutan. The Chinese accuse India of sending troops to Chinese territory in solidarity with its close ally, Bhutan, to prevent road construction. 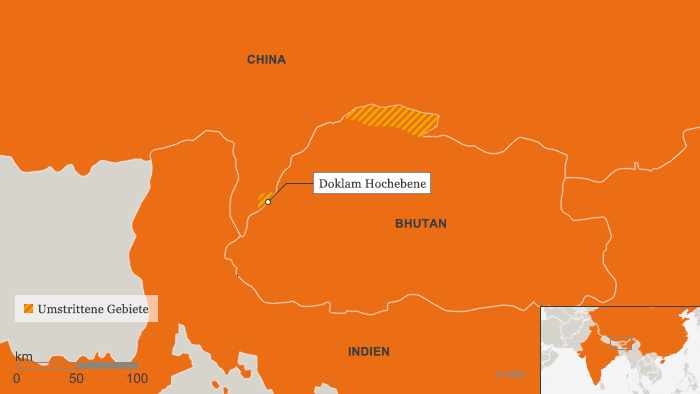 Should China enforce its claims in the region, it would have access to the so-called chicken neck, a narrow strip of land that connects the northeastern states of India with the rest of the mainland.

India's Foreign Minister Sushma Swaraj therefore spoke of a "direct challenge to our security" if China were to unilaterally change the status quo in the three-country area. As a prerequisite for a diplomatic solution to the conflict, both countries would have to withdraw their soldiers, she demanded. India's Prime Minister Narendra Modi is expected to attend a summit meeting of the BRICS countries (Brazil, Russia, India, China and South Africa) in China at the beginning of September.

China and India had already waged war over territorial claims in the Himalayan region in 1962. The two nuclear powers are linked by a 3500-kilometer border.