What is the nature of self

How nature heals itself

Volcanoes erupt, their glowing lava rolls down all life in the area; Bark beetles bring down hectares of forest; Leaking oil has destroyed flora and fauna in the Gulf of Mexico. But ecosystems often recover surprisingly quickly after such disasters. However, the result is often very different from what conservationists expected. 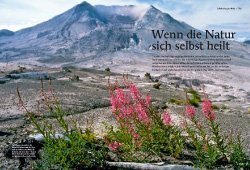 How nature heals itself
Nature has innumerable methods to protect and heal itself. After supposed disasters, ecosystems often recover surprisingly quickly - and in the process develop properties that they had previously kept in reserve. Man would like to make use of some of this in order to quickly restore the previous state. But it's not that easy.
Text: Matin Rasper
The art of flying
Researchers recently presented a robot for the first time that can fly like a bird - at least almost. The complexity and elegance of bird flight remains a barely achievable role model for engineers. A visit to the workshop of evolution.
Text: Sven Achtermann, Peter Laufmann 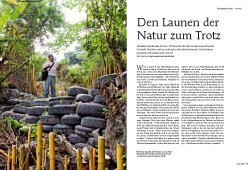 Despite the whims of nature
Either the earth shakes, the river overflows, or hurricanes devastate the town. Nature is not kind to San Pedro Masahuat. But the small community in El Salvador is not giving up.
Text & Photos: Cecibel Romero and Toni Keppeler 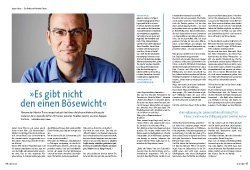 "There is no such thing as one villain"
Filmmaker Valentin Thurn has been denouncing the food destruction of modern consumer societies for a good three years. With his latest projects he shows what can be done about it.
Interview: Horst Hamm 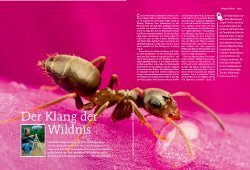 The sound of the wild
Californian Bernie Krause has been capturing the sounds of nature with his microphone for 45 years. He has overheard sea anemones burping and beavers grieving. A visit to this great collector of sounds - garnished with audio samples from one of nature's most extensive sound archives.
Text: Christoph Behrens 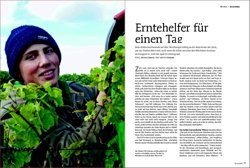 Harvest helper for a day
During the adventure weekend at the Kolling an der Nahe organic winery, guests learn how grapes are turned into wine. Even if the work between the vines is exhausting, the focus is on having fun.
Photos: Antonia Zennaro / Text: Birgit Ostemann 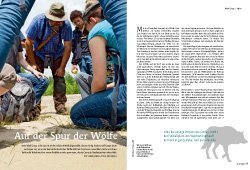 On the trail of wolves
At the WWF camp in Lusatia, the civilized world is logged off. Exactly right, said twelve young people and moved out to run wild in the homeland of the German wolves themselves. Six of them had participation through our editorial team nature won who supports the camp as a media partner.
Text: Andrea Mertes / Photo: Jörg Fokuhl 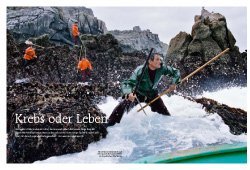 Cancer or life
Their prey is anything but beautiful, but it is a hit with gourmets: When catching the coveted Percebes crabs on the Galician coast, courageous fishermen risk their lives - in the fight against the forces of nature.
Text and photos: Christoph Otto 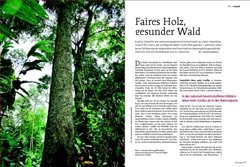 Fair wood, healthy forest
It is a symbol of responsible forest management: the “Forest Stewardship Council” (FSC). This “Council for the Care of Forests” was founded in 1993 - and since then it has been navigating a conflict of conflicting interests in the certification of wood products and companies. A critical appreciation for the 20th birthday.
Text: Thomas Weidenbach

Further topics in the October issue:

Hammer of the month: Left-wing type - Brandenburg's Minister of Economic Affairs allows even more brown coal to be extracted

Say…: What can we learn from snakes?

You can find our edition by October 17 in train station and airport newsagents and the easiest and best way to do this on our online ordering portal or when ordering single issues online.